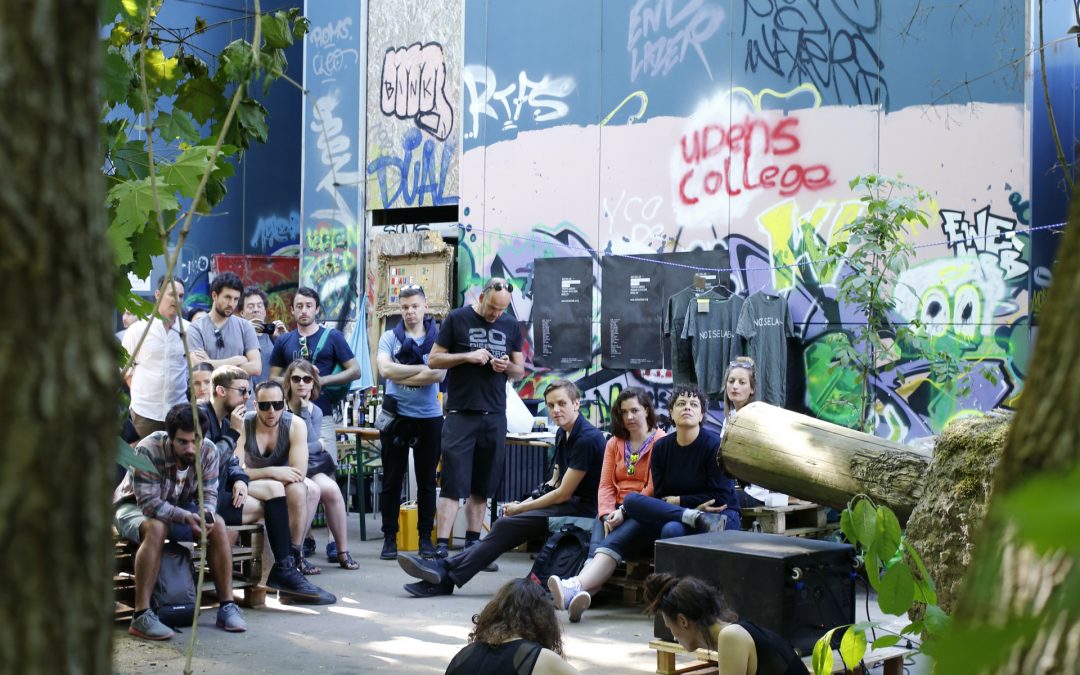 In his studio Alex works with rhythm and sound, in other words he searches for effects of beat and tone. The results can drift between brutal and therapeutic monotonous drones – but that is not always the case. (Only) analog and mostly modular defines the space for experimental generation of oscillations. Including self revelations.

“Amium“ performances are always ephemeral in interaction with their environment and audience. Oscillating from an ambient atmosphere to a more experimental structure, Amium always explores and pushes the aesthetic limit of their sound.”

Daniel Matz likes to com­bine orna­men­tal melodies with painstak­ing chordal work, cre­at­ing a sound that is both thrilling and dis­turb­ing. It’s a bright-eyed and bushy-tailed music, that grows from a core of a seem­ingly unend­ing play­ful­ness and excitement.

Marilyn Mouradian a.k.a Melody (FR), multipolar artist started exploring the microcosmos of the body while studying medicine and is working in the field of movement. Fascinated by the animal spirit and closely connected to the importance of energy related to human existence she creates a visual improvisation of expression.

Gregorio Fonten is a sonic poet from Chile with a PhD in Sonic Arts from Goldsmiths College, London.
www.gregoriofonten.com
Amalia Valdés is a Chilean artist with a degree in Fine Arts from Finis Terrae University (Chile, 2006) She currently lives and works in Berlin.  Her visual research begins with the use of geometry and the depiction of sacred geometry symbols present in Latin American cultures as well as in ancestral civilizations from different parts of the world. www.amaliavaldes.cl

About our collaboration: Amalia Valdes’ pieces carve precise triangles and diagonal lines into musical paper. I took this as a starting point to 1) design a signal processing tool to manipulate audio sources via triangle and sawtooth waves. 2) the kind of gestures and elements that make up the audio sources

One tone to the moon

A spherophonic sound based live performance inspired by Pythagoras studies on celestial bodies.

Stefan Röslmair is an Italian-Germa producer, composer & keyboard player based in Berlin. His sonic identity has evolved alongside his journey from classical piano studies to production. Learning to play at an early age, he began mixing and slicing classical music in late 1998.
Most of his composition are inspired by and made for movies, installations, architectural spaces, performance and dance. His work is influenced as much by classical minimalism as by electronic music: textures of acoustic and electronic sounds slowly coalesce into huge, forbidding forms that often eschew conventional structures ranging from idm, techno to soundscapes and concrete sounds.

A piece performed while falling asleep on a Keyboard.

For Zabo Chabiland, live performance induces an almost hypnotic state. Narcolepsy is not something she normally suffers from, until she sits at a keyboard. Her ambition has never been to play the instrument, rather to ride it, surfing the waves of sound. By shifting the pressure of her elbows along the keyboard, a musical dream can be heard playing in the distance, somewhere deep in her imagination. When she finally wakes up the piece is over and  as waking from any long nap, she feels thoroughly relaxed, well-rested, squinting from the light, wondering what it was she just dreamt. Ken Shakin

Sleeping Odyssey is the last version a sleeping tour that started in 2008.
Especially cosmic for the subdivision of Grautag records: Sunatra

For innumerable days, Polyplay have been sitting in Erich Mielke’s home studio 50 meters below the ground in Berlin and are working on the Volksklang with a pioneering urge to explore. Sufficiently supplied with canned tangerines from the state-owned enterprises, and strengthened for their protagonistic work by the Folk Art Cabinet, Polyplay create the sound for a new generation of solidarity-based dance groups.

it´s time to celebrate house warming of the instituts new location on teufelsberg – STÜTZPUNKT. die elektromods are going to please your ears with their unique mix of electronica, ambient, minimal techno, noise and industrial.

Its origins in the Berlin crossover of media-art and club culture and inspired by minimal and punk the VJ-band JPECH presents trademark “3-ChordVisuals” REAL-TIME and in the form of objects and installations in bars, clubs, galeries and museums, on music- fashion- and designfestivals, in cities throughout Europe and Asia.

Siegfried Kärcher (Frankfurt/M) (*1974) is an Artist Extraordinaire and known for his creative approaches to Art and Music working in Frankfurt/Main.

After passsing the Test for the Highly Gifted he studied Free Arts. He is a early member of the Computer Scene since Commodore Homecomputers appeared and infected with the Electronic Music Virus since his first dancing steps at Technoclub Dorian Gray Frankfurt Fame.

Nowadays he hosts several underground events like 303 DAY or Glitch it! Festival or the Siegfried Kärcher Kunsttage located at the Post-Cold-War Station Radom auf der Wasserkuppe.
Siegfried Kärcher will sample live at Teufelsberg and perform a Concert with the collected Teufelsberg Materials.

Filled with organic sounds, field recordings, analog synths, electro-acoustics, drones and noises… prepare for an ambient experimental journey to the deeper levels of consciousness. A heavy past of dark energy resonates within the devil’s mountain. Today we communicate dark and light. The emotions of life we understand but cannot put into words. The melancholy and blissfulness of the human condition. Welcome to the imperfect perfection of the present moment.

Setting out to break boundaries in this inter-active musical experience using the Dots Gallery on the 2nd floor. This dome is the highest point of Berlin. We will be using it as a live effects room transmitting live audio through 250 meters of send and return cables. The unique acoustics of the dome interacting with the old bathroom of the building makes this a very unusual, creative way to use the environment to impact the music real time.

A duo of two sirens founded during a trip around Iceland in the winter of 2016. They create performative installations composed of looped sounds, whispers, broken narrations and electronic music, images and light.   & the romantic horse

This musical form is the result of bridging sound and textile, where tactile and musical gesture meet. The performance space given by a two dimensional tangible textile questions the spatial organisation of sounds and their representation. In its minimalism such a performance tends to foster listening and sonic interaction, in which a textile instrument left blank of visual informations is the facilitator.

In recent times, Daniel has been interested in feedback, tape manipulation, no input mixing, memory, audio vérité, non-linearity, decay, greyness, field recording, Max patching, improvisation, thinking about thinking and cats. By time you read this short ramble, dear reader, he may have found a new set of ideas that quicken his heart, rendering this list an awkward reminder of his former curiosities.

RCO is an artists‘ collective that wires up everyday objects, developing different types of circuitry to generate and experiment in sounds and noises. A variety of devices and noise sources are arranged in interactive feedback-loops and polyphonic sound installations. Live RCO assembles momentary and improvised setups that consider the specifics of a particular space and its situation and integrates these into the continuously changing acoustic environment.www.facebook.com/XRCOX/

Pit Ruge makes use of a physical law with his sound installation:A rotating cord beats waves and makes the self-made string instrument to swing. The result is resonances and overtones, a playful chaotic sound world is the result

Light and colorful, transparent and fleeting are the bubbles that Pit Ruge photographed for his series „Von Sphären“. Sensitive and full of reflections make the bubbles visible, which is not visible. Already a small breath lets them fly.

They are like a reflection of our world, poetic and enchanting is the resulting world of images. A short moment in here and now – is what brings a dazzling bubble with it